If you’re only cooking on grates outdoors, then you’re missing out on a lot of great dishes that can be whipped up on the grill. Some foods are just too fragile or too small to plop on grill grates. Stick these foods in a cast iron skillet, and you greatly expand outdoor food options.

Most pans were not designed to sit over direct fire or high heat, but cast iron is tough and perfect for outdoor cooking.

Cast iron works fine on the side burners on gas grills but can also go right on the edge of charcoal grills or can be used on open campfires.

Some people avoid cast iron, because they are concerned about the seasoning and the upkeep. It’s really not that hard to season cast iron. Once seasoned, they are just as easy to clean as Teflon (or even easier). If you mess up the finish (which can happen), you just re-season. 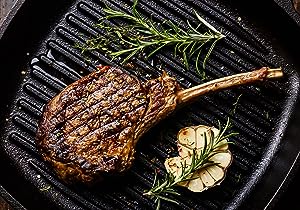 To season a cast iron skillet, just rub the pan good with a solid fat. This can be something like lard, but solid Crisco is also fine. Don’t use vegetable oil. It makes a drippy finish and is sticky. I see a lot of directions where they say to oil up the cast iron pan. Don’t do it. You’ll have a mess.

Stick the cast iron pan in the oven at a low temperature (200 to 250 degrees F) and let bake for an hour-and-a-half to two hours. This part is pretty flexible. As long as the temperature is low and the pan is baked for a pretty good length of time, you’ve got a nice baked cast iron finish.

That’s it for the seasoning. See. That wasn’t hard.

Breaking In a Cast Iron Skillet

Avoid tomato based foods in the first few months. The acid is hard on a new finish. Once the pan is broken in well, then it’s OK to cook acid based foods.

Some people say that you should never put cast iron in water. They suggest simply wiping out the pan. That can work if the pan is not very messy. It does go against my sense of cleanliness. So, I do wash cast iron skillets in the sink.

To wash a cast iron skillet, I put hot water and just a little dish washing liquid in the sink. I dunk the pan in and wash immediately. I use a soft cloth. If some food is stuck on, I will lightly scratch the pan, but I try to avoid that.

Once clean, I dry the cast iron pan. I sometimes put it on a stove eye and let it dry a few minutes more on low heat.
It’s important to dry a cast iron pan well, because it can rust.

Ut-Oh – Now I Messed Up My Cast Iron Skillet

If damaged (like left sitting with food or got wet and rusty), just use a scratch pad to get off any ugly spots. Then, season again like you would with a new pan. No problem. If the pan is in really bad shape, you may need to season a few times to get it really right again.

It’s almost impossible to ruin a cast iron skillet – no matter what you do. I’ve only seen one damaged. It was put on a hot stove eye and forgotten for what must have been a really long time. It warped slightly.

Food cooked in cast iron (outdoors or indoors) is fabulous. Cast iron adds a bit of extra flavor as well as some needed iron in the diet. If you tend to be anemic, cast iron is an excellent choice. Some of the iron is absorbed in the food.